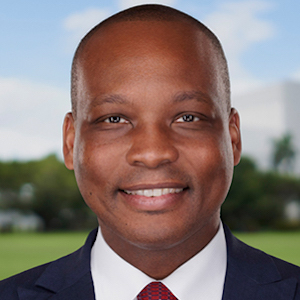 Gregory Adam Haile, J.D., is the seventh president of Broward College. The institution, which serves more than 60,000 students annually, is part of the Florida College System and was named a Top Ten finalist for the prestigious Aspen Prize for the years 2013, 2017, 2019, and 2021. Since beginning his tenure as President in 2018, Broward College has significantly expanded its business model by offering educational opportunities, workforce training, and support services directly in neighborhoods throughout Broward County through an innovative approach called Broward UP.

Haile has served in more than 40 board or committee capacities and in more than 20 chair or vice-chair capacities. He is currently the chair of the board of Leadership Florida and serves on the boards of the Federal Reserve Bank of Atlanta, BBX Capital, the Florida Chamber, Pace Center for Girls, the Broward Workshop, the United Way of Broward County, and the Greater Fort Lauderdale Alliance. He is also a member of the Orange Bowl Committee and has twice received appointments by Governor Ron DeSantis: first, to the Department of Education Career and Technical Education Advisory Committee, and second, to the Re-Open Florida Task Force. He has received dozens of recognitions for his leadership, service, and excellence in his profession and routinely serves as a keynote speaker, primarily speaking on the transformational power of higher education. Haile was educated at the Columbia University School of Law, where he was a Harlan Fiske Stone Scholar and served as the editor-in-chief of the National Black Law Journal and as an editor of the Journal on Gender and Law. He received his bachelor’s degree from Arizona State University, where he graduated magna cum laude and received the Most Outstanding Graduate award in his college. He received an Honorary Doctorate of Humane Letters from Nova Southeastern University and is also a fellow of the Vanderbilt University Higher Education Management Institute.