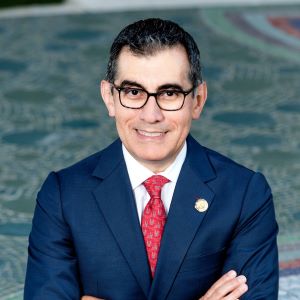 Flores’ vision for the Alamo Colleges District – eliminating poverty through education – is based on his personal experience as a child of migrant farmworkers who pursued education to gain economic and social mobility. Through his leadership, the Alamo Colleges District has launched AlamoPROMISE, a tuition-free college program for graduating high school students in Bexar County and one of the most significant initiatives implemented in the region.

During his first year as chancellor, Dr. Flores led the Alamo Colleges District and its five colleges in celebrating the recognition as the only community college system in the nation to be awarded the Malcolm Baldrige National Quality Award, the nation’s highest Presidential honor for performance excellence through innovation, improvement and visionary leadership.

Flores was born in Del Rio, Texas, and is a graduate of Holmes High School in San Antonio’s Northside Independent School District. He holds a Ph.D. in Educational Administration from the University of Texas at Austin, a master’s in Political Science from Illinois State University, and a bachelor’s in political science from the University of Texas at San Antonio. He lives in central San Antonio with his wife Martha, a talented creative director and entrepreneur, and their daughters, Mara Zoe and Mia Ximena.