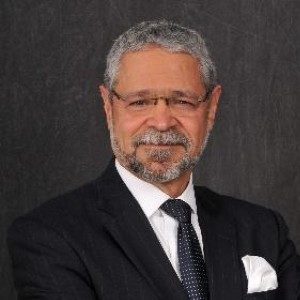 Dr. David Gómez was appointed the College’s new and seventh President, after a vote by the CUNY Board of Trustees on Monday, June 29, 2015.

Dr. Gómez had been Hostos’ Interim President since July 2014, when he replaced Dr. Félix V. Matos Rodríguez, who was named President of Queens College in June 2014.  Before serving as Interim President at Hostos, Dr. Gómez was a longtime senior administrator at Kingsborough Community College, serving as Dean of Instructional Services, Vice President for Academic Administration, Program Planning and Development and Interim Provost.  Also a faculty member at Kingsborough, Dr. Gómez held the rank of Professor in the Department of Behavior and Social Sciences.

During his four decades of service with CUNY, Dr. Gómez has worked with many talented professionals in each of the three divisions he has counted in his portfolio including Student Affairs, Academic Affairs and Finance and Administration. He credits this breadth of experience with giving him an appreciation for the challenges and opportunities available to professionals in higher education.

His experiences with his students are the ones he holds most dear. Indeed, Dr. Gómez maintains the classroom is where every educator draws their strength and inspiration. During his time at Kingsborough, Dr. Gómez also served as a consultant, locally and nationally, assisting community college leaders improve the quality of services at their institutions.

Dr. Gómez’s publications and research interests have focused on the community college movement.  In recent years, he has examined critical practices that can move institutions “from good to great,” the importance of student support services in advancing student success, and aligning the objectives of the institution’s three main divisions to achieve common goals.  He has spoken at numerous conferences on the challenges facing community colleges including, most recently, at Teachers College, Columbia University on the national agenda and the community college.

Born and raised in New York City, Dr. Gómez is a proud product of New York City public schools.  He attended the State University of New York at Albany, where he earned his baccalaureate degree in English literature. He earned his Masters and Doctoral degrees in education at Teachers College, Columbia University, where he studied under Dr. Walter Sindlinger, an early champion of the community college movement.